When you purchase a queen pack or software license, we activate queen room application within one day. Follow this guide to do that…

copy this fingerprint ff7e92ac40fd2f4e72c684afa244d196 and send it to the queen developers to Escape Room Doctor on e-mail dsi@escapedoc.com. Using your fingerprint we will generate an activation key in md5 format as well and send it as a e-mail reply. For example we generated the following key: aa0944b790eb9e7b9cc68aa5b6e0b1be.

After receiving an activation key, open your queen project in the queen studio editor and paste the key aa0944b790eb9e7b9cc68aa5b6e0b1be in the 'key' field of the properties window in the project block (it will appear when you left mouse click on the canvas): 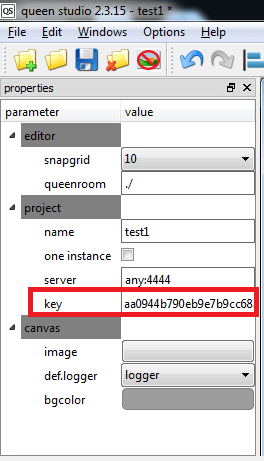 Save and copy your project to the target hardware and run it. Trial mode will disappear. You can find it, if the window caption will not include an indication like trial version, 15 minutes operating limit, and the queen room can be assumed activated for the lifetime further.

Previous article
How to download
Next article
General Info